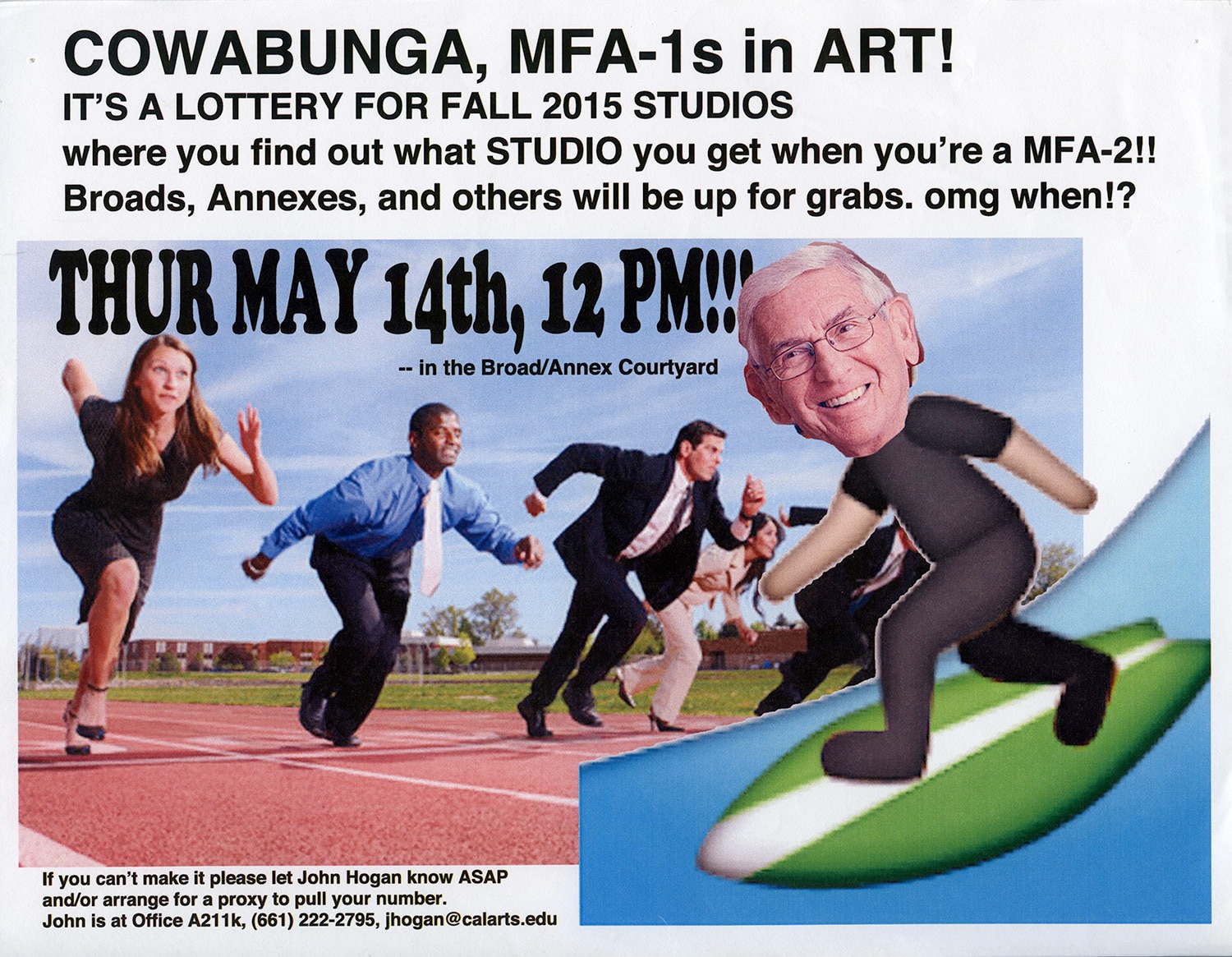 Studio lottery flyer featuring CalArts benefactor Eli Broad (after whom Institute studios were named, and are among the most coveted on campus) and emojis, which, per Hogan, “were very much in the zeitgeist at the time.” | Image courtesy of Insert Blanc Press 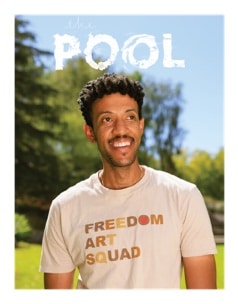 A lot has changed in the 16 years Hogan has held his post, but capturing students’ attention is an unceasing challenge that has left higher education staff and faculty furrowing their brows for years. One of Hogan’s solutions is a holdover from a more analog era, but one that remains en vogue at the Institute: flyers.

Here to Help! is a compilation of Hogan’s personal favorites, which have accumulated in a dedicated folder in his office file cabinet since assuming the role. Far from a catalog of nondescript notices pleading with students to clean their spaces, the flyers in the book are witty dispatches by a fellow artist who implicitly understands his audience and can play their game.

Keeping astride of students’ imaginative new ways of flouting the rules keeps the job fresh, but the flyers are one of the stable elements of Hogan’s position. They are even cathartic, as stated in his essay:

They served as a kind of therapy for me. A release valve for tension … I worked through the farcical nature of my position in public, to indicate to the students that I was aware enough to realize this was all absurd and they had no regard for it, but I would actually go through with it anyway. This mix of gallows humor and Authoritarian Lite came to define my herding approach for these feral cats we called art students.

The book’s creation is a CalArtian affair, featuring additional essays by Molly Jo Shea (Art MFA 19) and School of Art faculty Michael Ned Holte, and edited by fellow alum Mathew Timmons (Critical Studies MFA 05), founder of the book’s publisher Insert Blanc Press. The book’s cover and layout were designed by Dameon Waggoner (Art MFA 18), whom Hogan credits with coming up with the book’s idea in the first place and setting it in motion upon receiving an Alumnx Seed Grant.

Hogan also cites the Official California Institute of the Arts Residency, Adam Otto Lutz’s (Art BFA 20) curatorial thesis project, as the impetus for the book. Though the program was ultimately deemed “unofficial” by the Institute, Lutz invited Hogan to join the residency in the final week of the semester, during which he shared a selection of his flyers and delivered an artist talk titled the “Permanent Staff Lecture”—the skeleton of what would eventually become Here to Help!

“The whole book is sort of meant to be a parody of an artist’s monograph,” said Hogan. “So every single flyer is supposed to have some kind of import to it that requires further explanation. I just think it’s funny, because flyers are supposed to be self-explanatory and simple, so I like the idea of not only making long, ridiculous flyers, but also explaining them using my MFA and critical thinking skills to examine them as artworks.”

These reflections can be found in the “plate information” section at the back of the book, accompanying thumbnails of nearly every featured flyer. The blurbs take on a humorous yet borderline diaristic quality, capturing flashes of zeitgeist that have arisen throughout Hogan’s tenure.

“I didn’t really think of it as a timepiece when we made it, and now I’m like, yeah, this is like a time capsule,” he said of the book. “It’s a time capsule of marginal aspects of CalArts, but I also feel that it tells a different story than that of different art stars and important thinkers. It’s like the day-to-day life of the school in a way that I don’t know is represented in other places. It’s kind of fun and interesting on that level, especially if you’re a truehead of CalArts history.”

Few are perhaps better suited to tell this story than Hogan, who, in addition to being a CalArts alum and staff member, has also periodically served as faculty in the School of Art. His role as an educator, he reflected, provided a new perspective of the student artists with whom he shares a mock-adversarial relationship as studio manager.

“The students, they’re really smart,” said Hogan. “They all just come here and have the most critical minds, so that’s why I had to raise my game for everybody. That’s why the stuff in the book, if it’s funny or interesting—that’s why. The audience are brilliant people. Even when they are vandalizing it, it’s pretty funny and clever.” 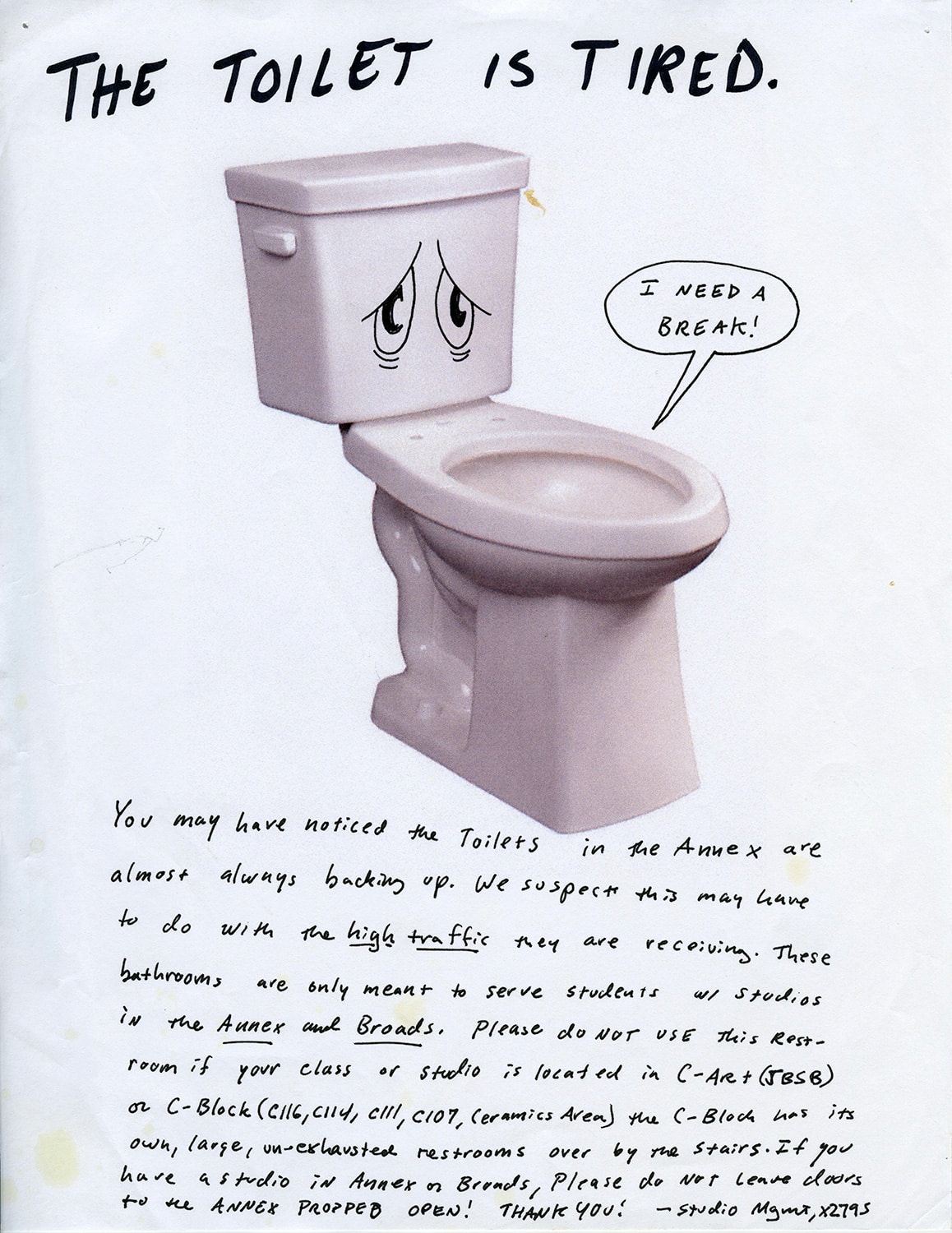 A toilet in one of the studio blocks was leaking purportedly due to “overuse.” However, Hogan admits in the plate information section that they continued leaking even when the campus was vacated during the pandemic, leading him to believe that claims of overuse were unfounded. | Image courtesy of Insert Blanc Press 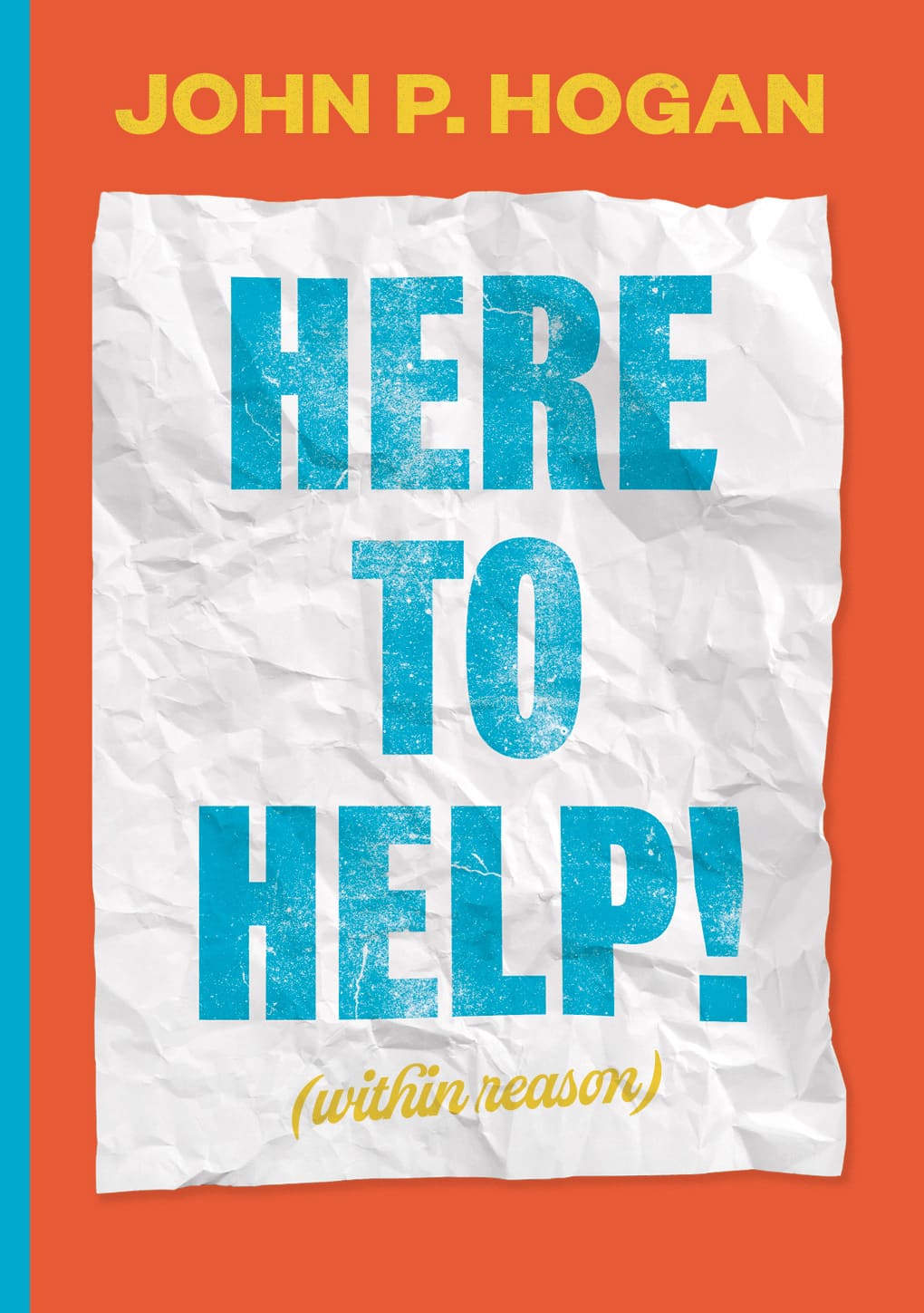 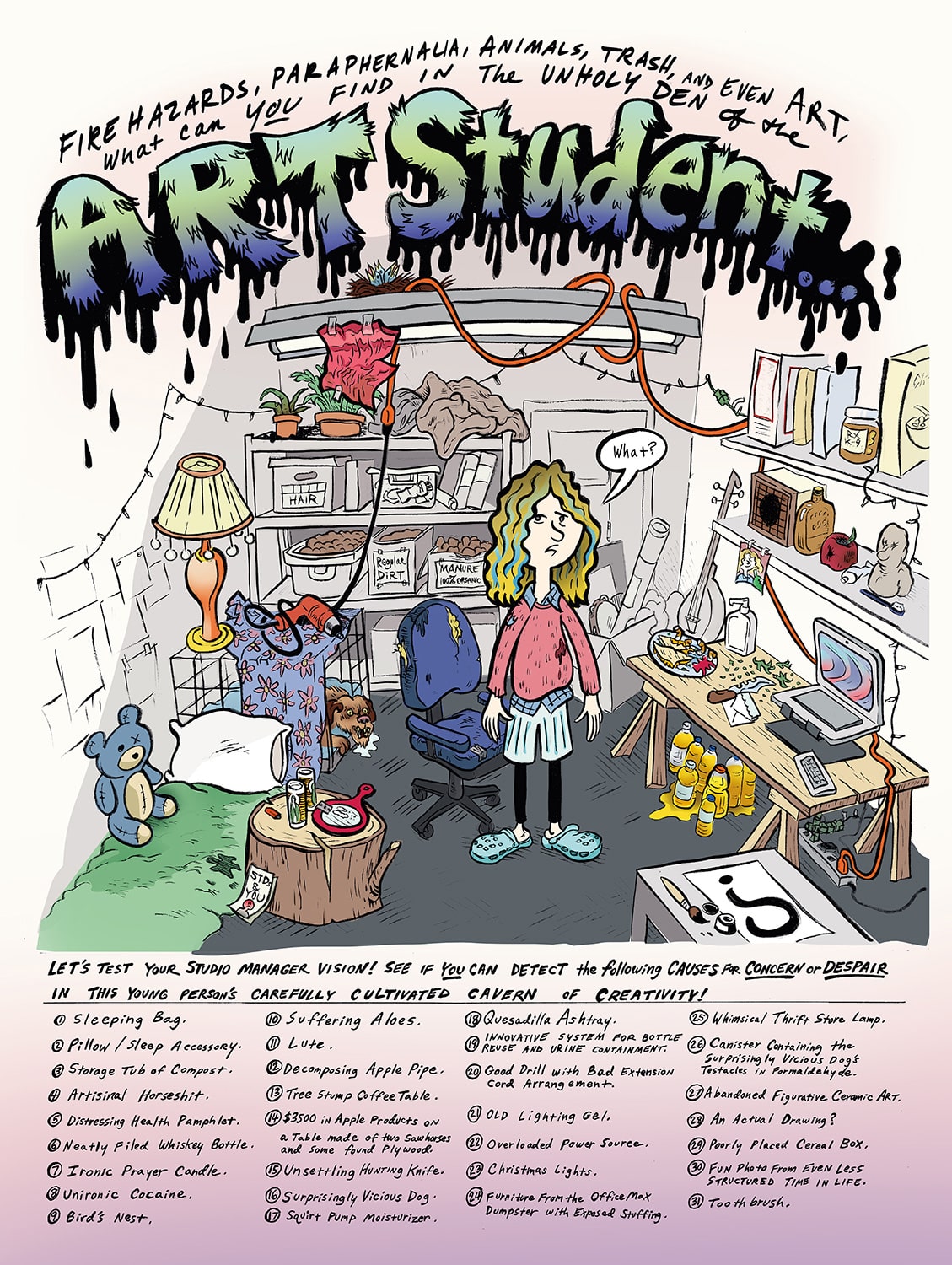 <i>The Unholy Den</i>. See if you can spot all the causes for concern in this limited edition print by Hogan, available for purchase alongside the book. | Image courtesy of Insert Blanc Press 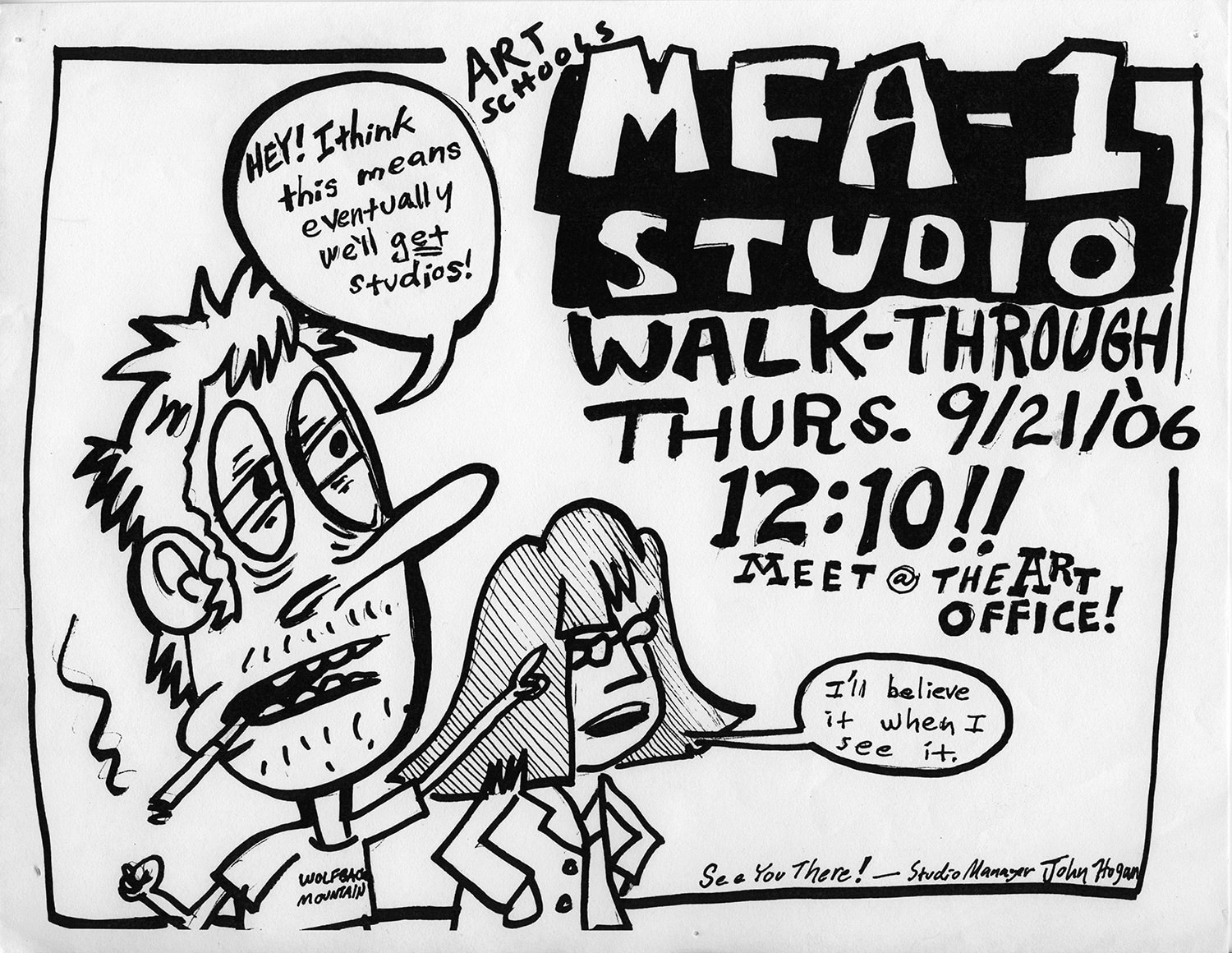 This studio walk-through flyer from fall 2006 was one of the first Hogan created after getting the job. | Image courtesy of Insert Blanc Press

Studio lottery flyer featuring CalArts benefactor Eli Broad (after whom Institute studios were named, and are among the most coveted on campus) and emojis, which, per Hogan, “were very much in the zeitgeist at the time.” | Image courtesy of Insert Blanc Press 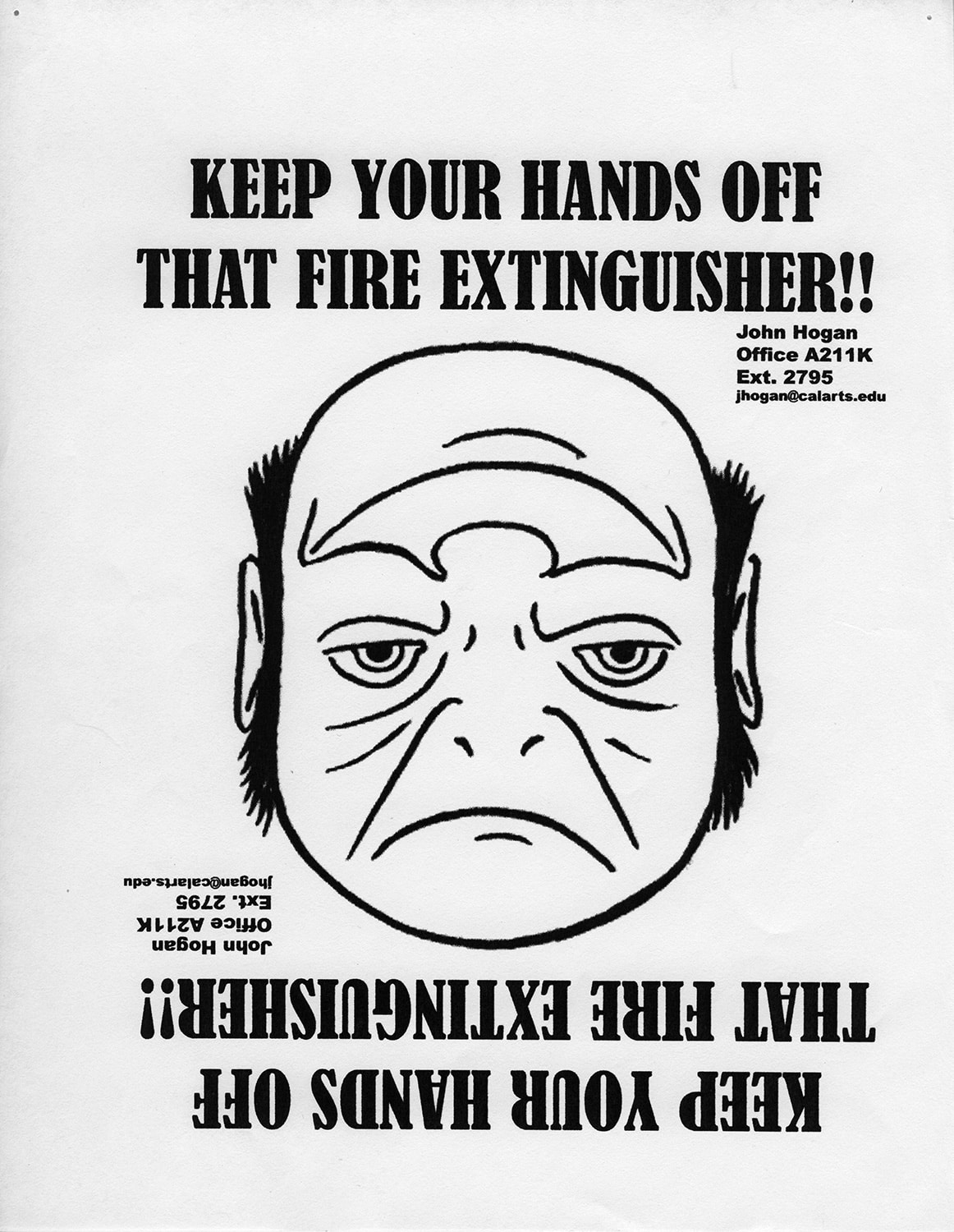 Hogan’s solution to a trend among the students to flip all the flyers upside down. | Image courtesy of Insert Blanc Press 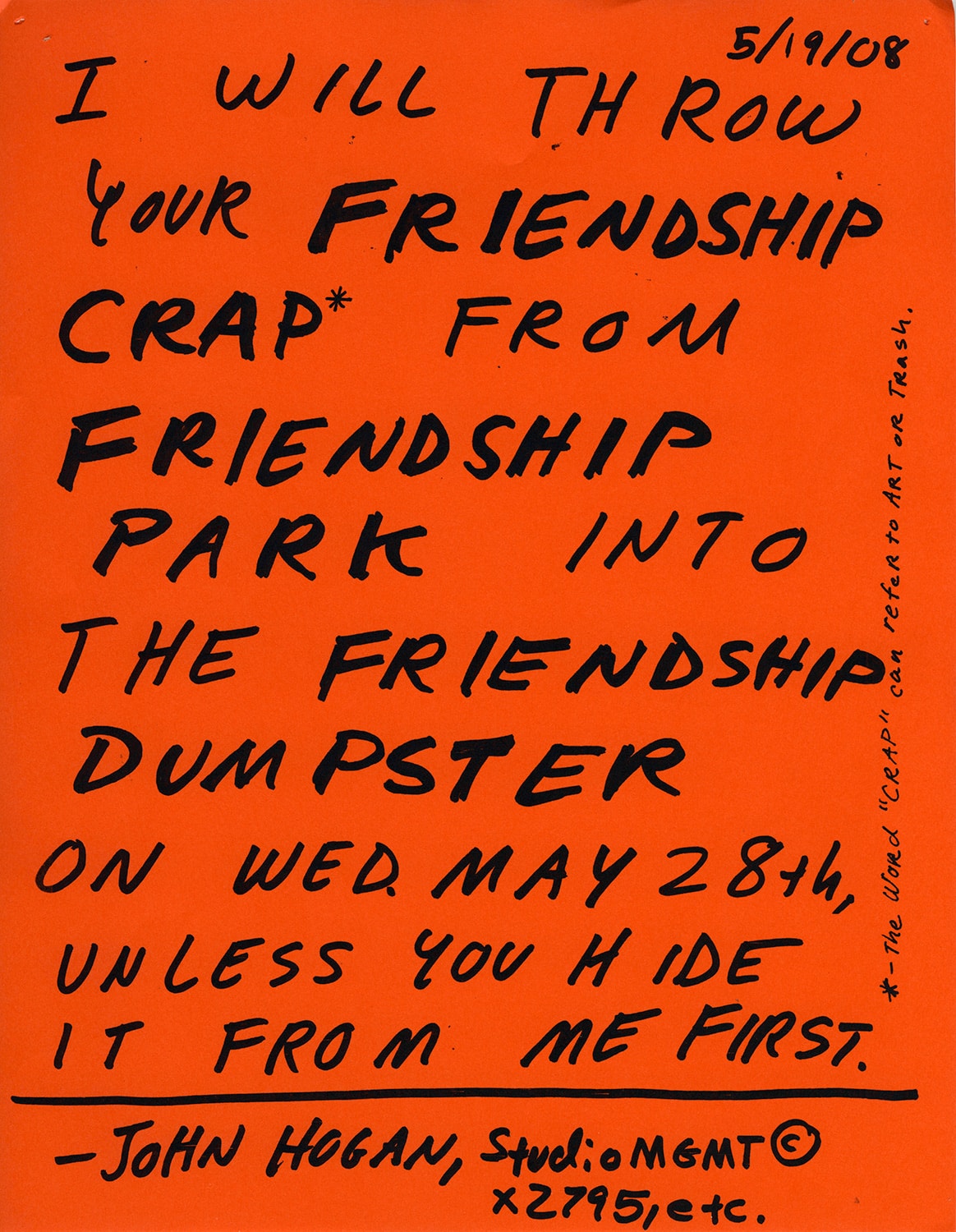 Hogan states that a challenge he regularly faces as studio and gallery manager is discerning whether items strewn across campus are art or just trash. | Image courtesy of Insert Blanc Press 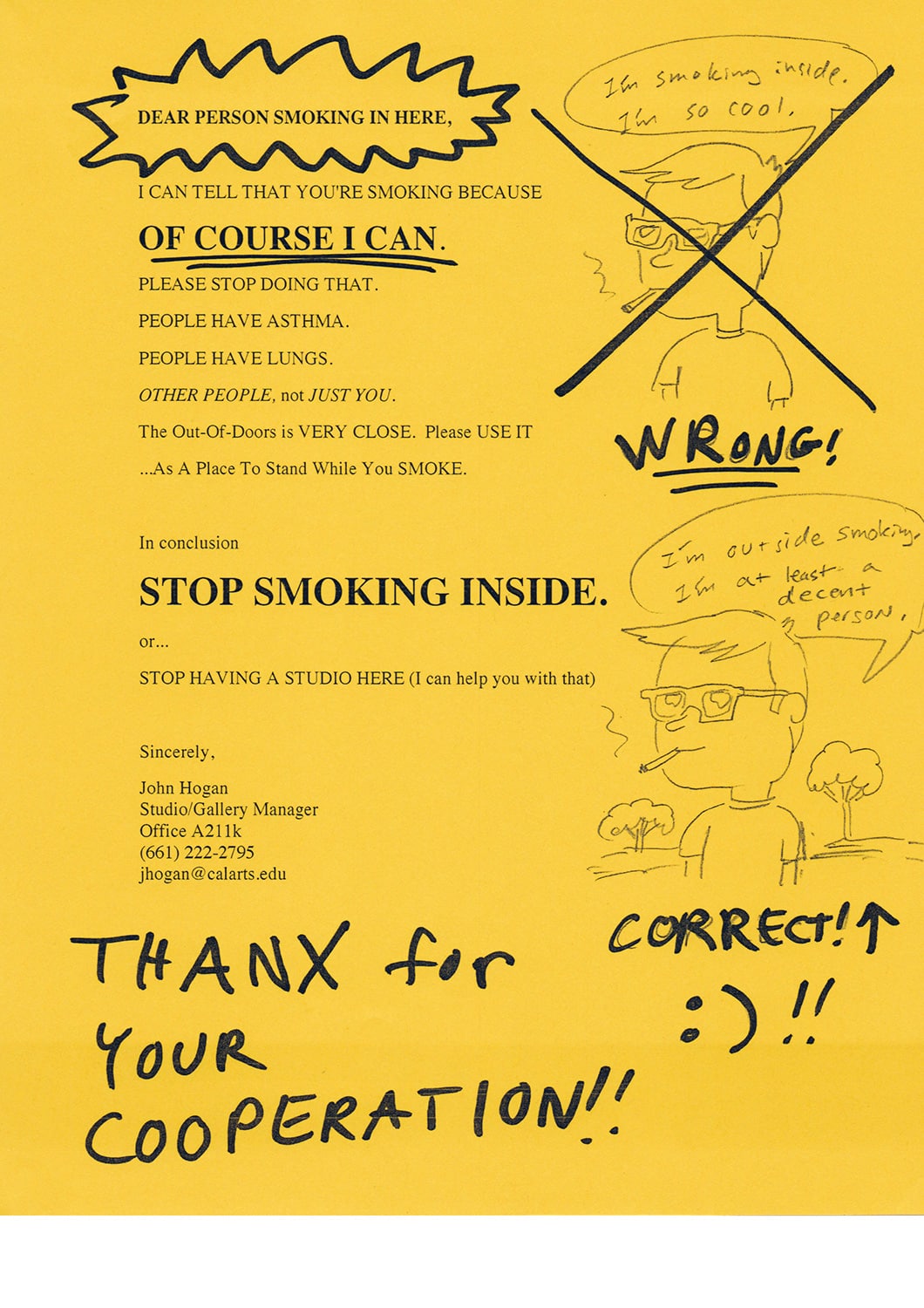 A notice to stop smoking inside the studios. Hogan’s personal note: “Kind of obnoxious but I stand behind it 100%.” | Image courtesy of Insert Blanc Press 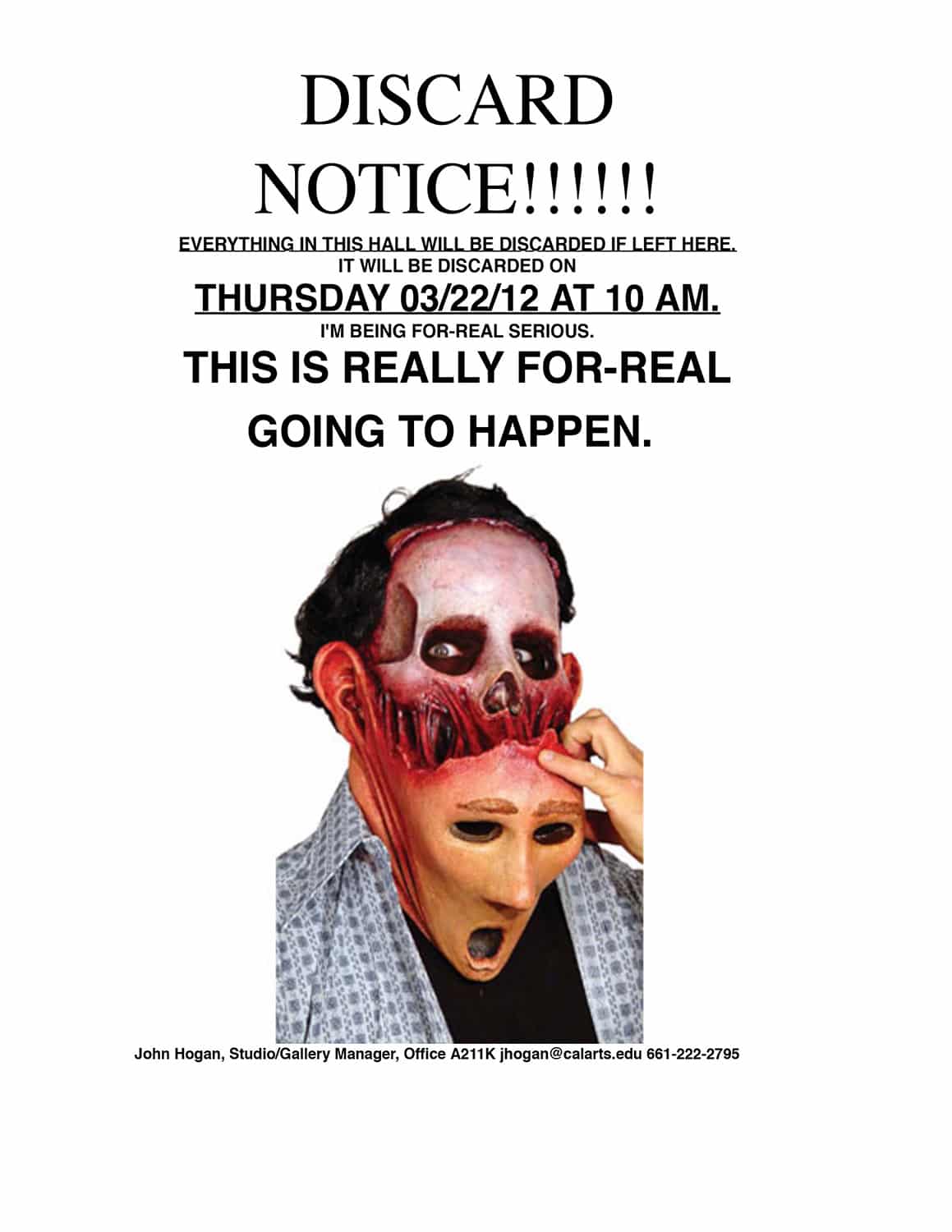 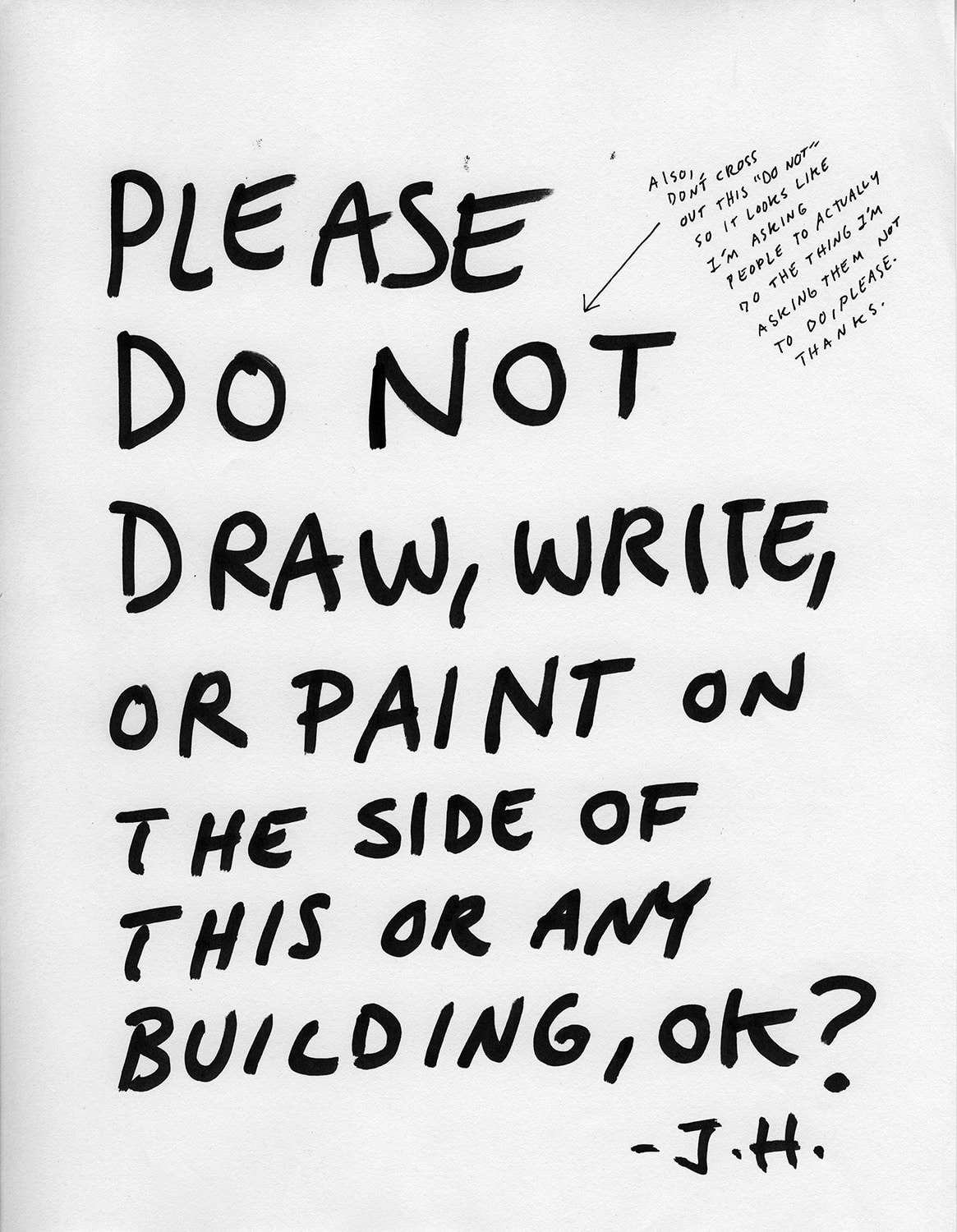 Straightforward notice to not vandalize the buildings. | Image courtesy of Insert Blanc Press 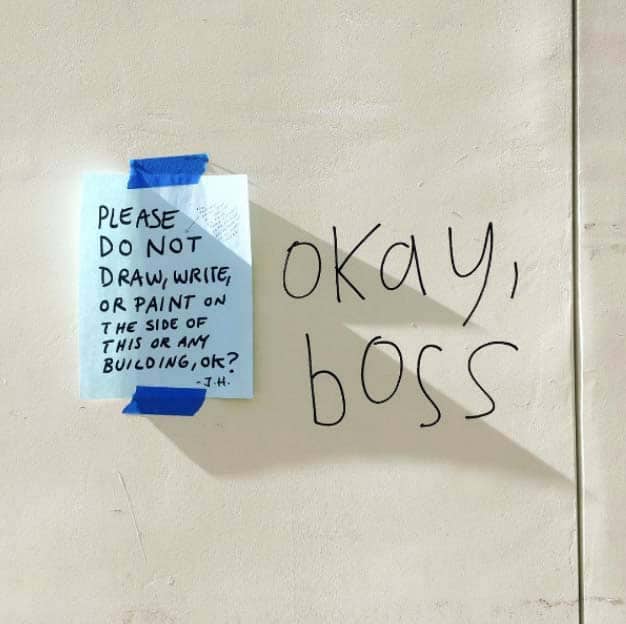 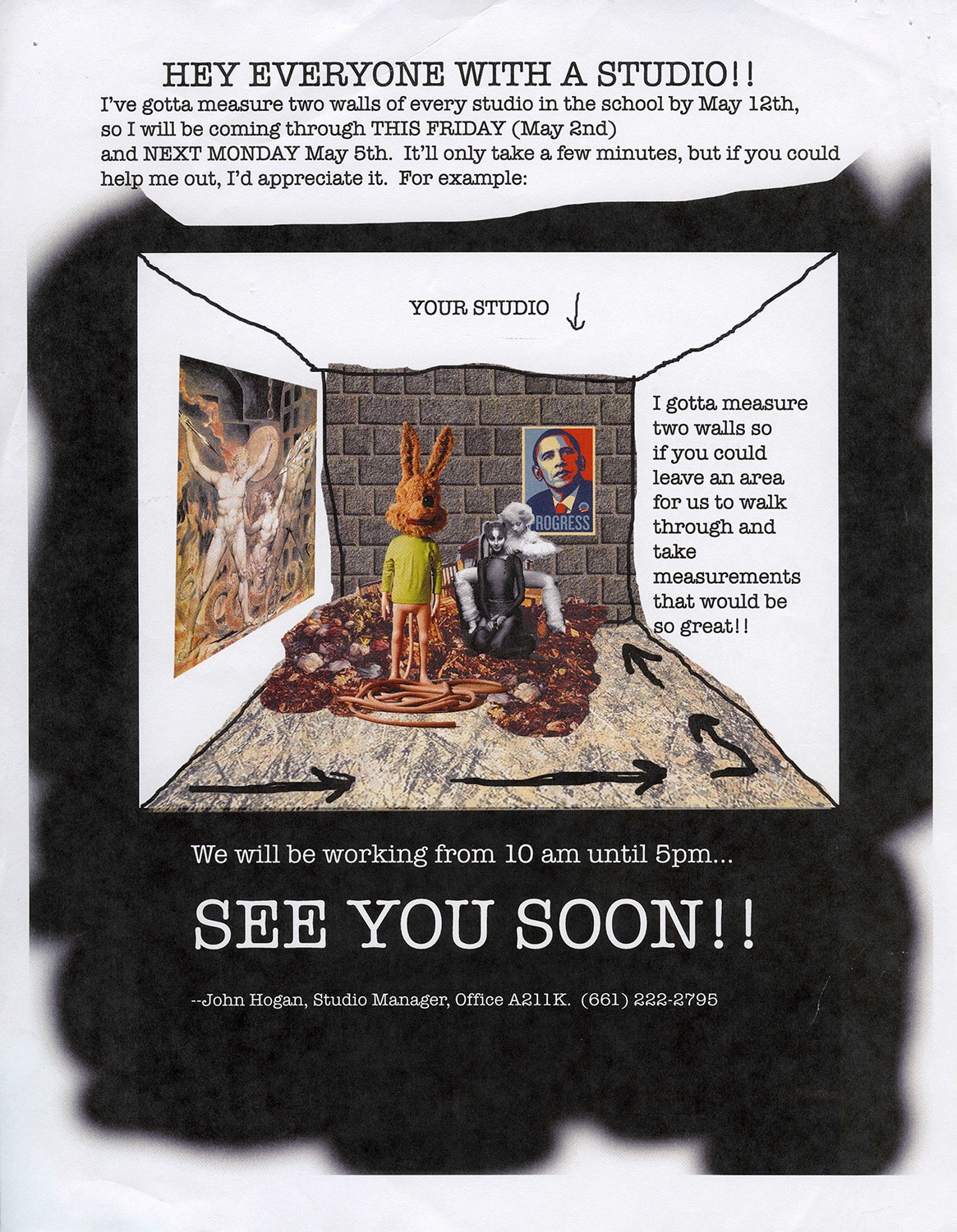 Fantastical flyer for an otherwise ordinary announcement: studio spaces needed to be cleared enough to have two walls measured. One of Hogan's favorites. | Image courtesy of Insert Blanc Press 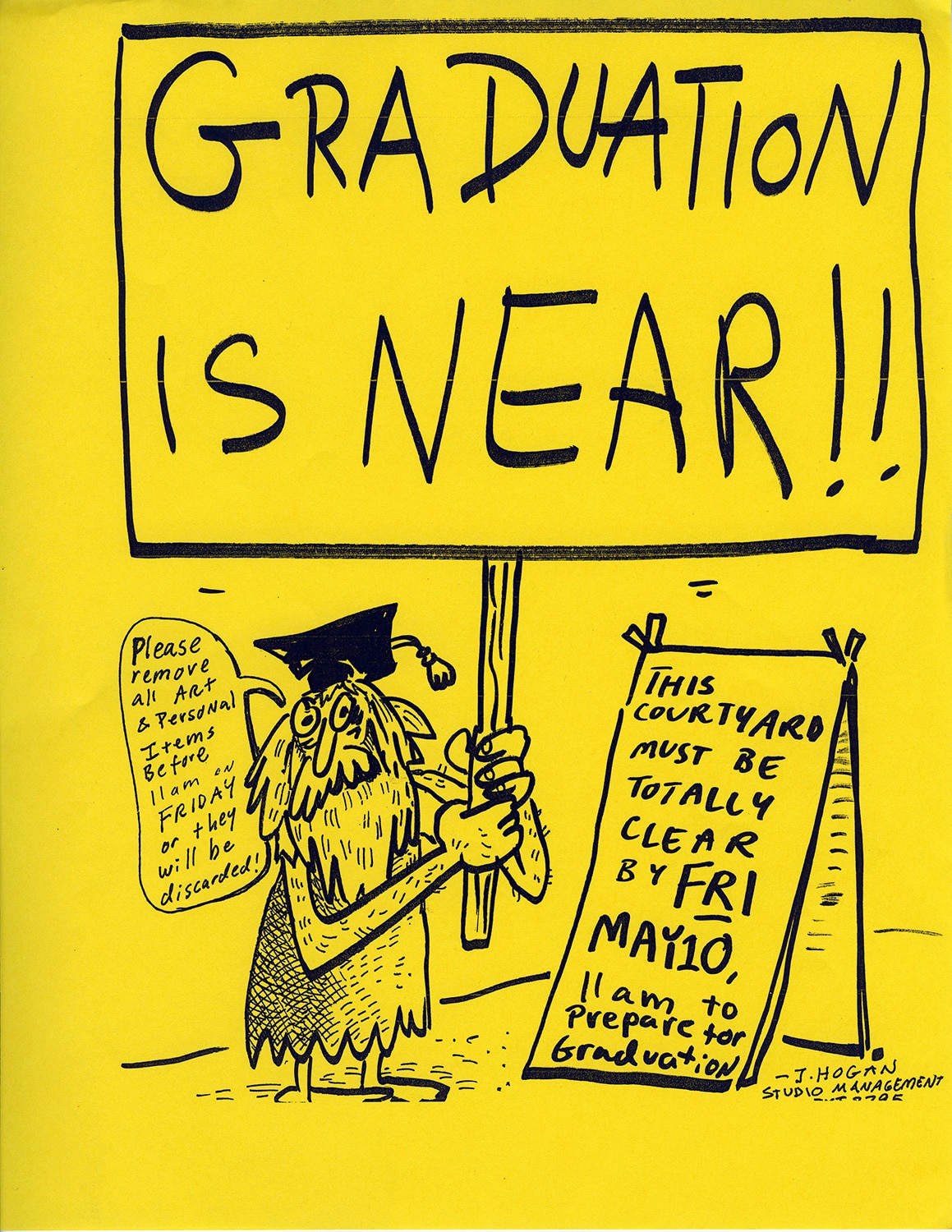 As graduation approaches, students must clear their spaces of the garbage that has accumulated over the course of the academic year. | Image courtesy of Insert Blanc Press 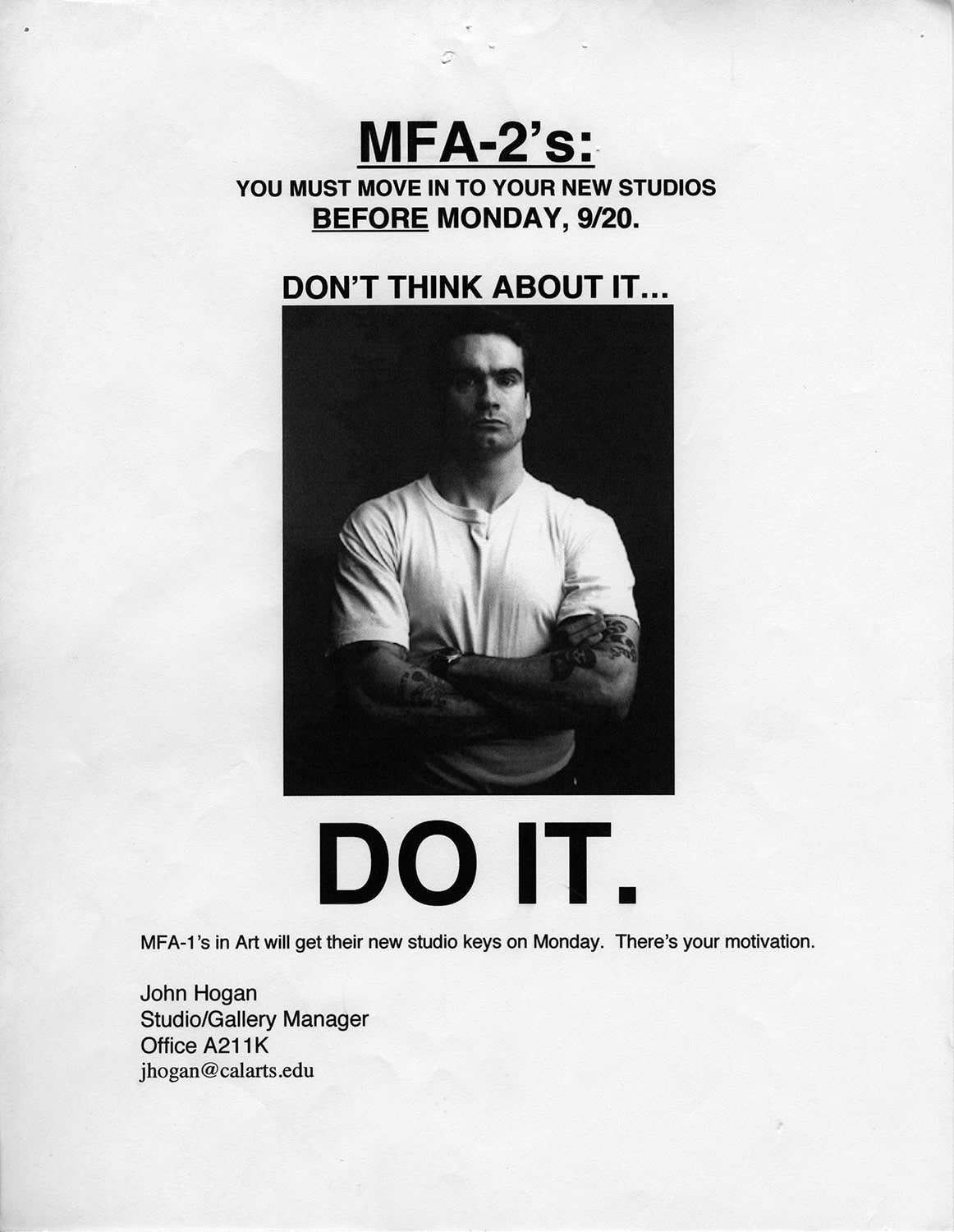