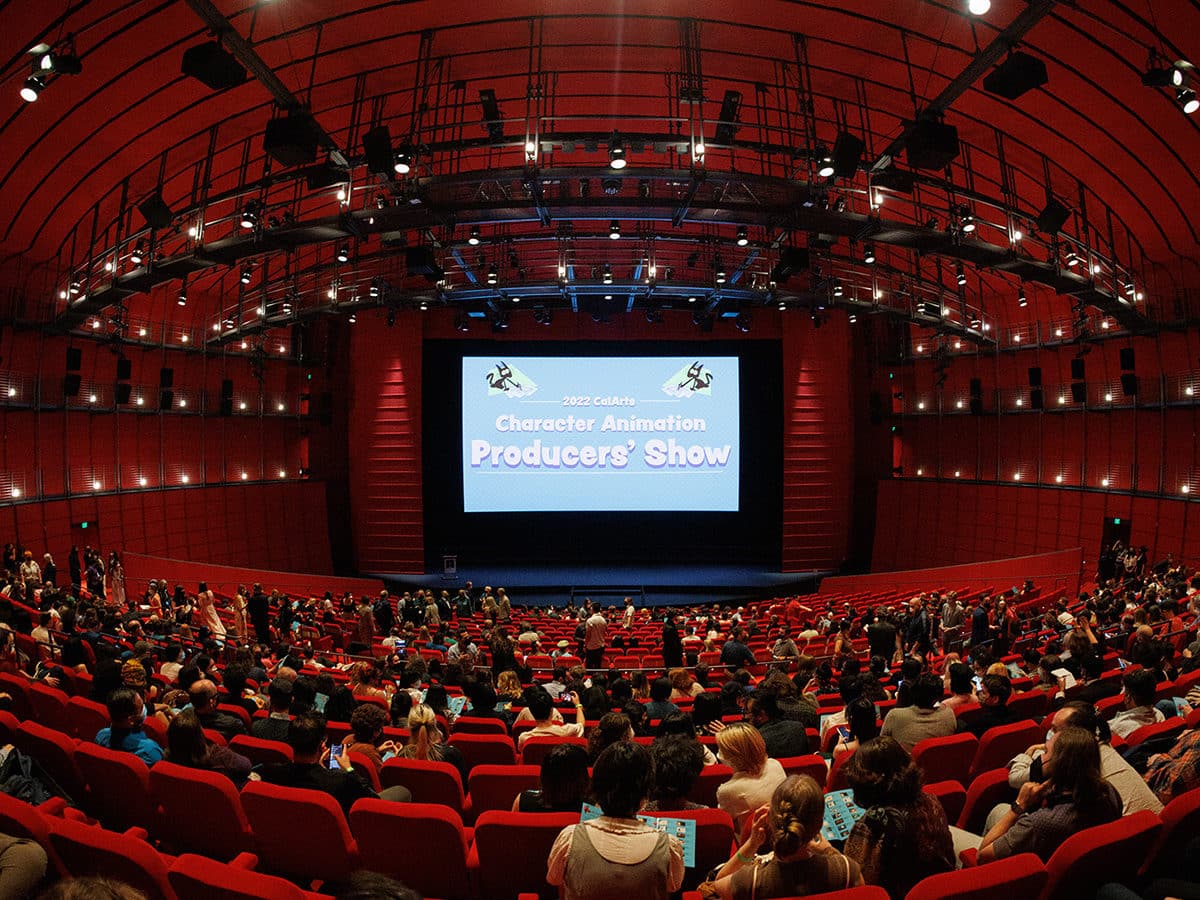 Sojourn to the Silver Screen

A thought that immediately registers upon stepping into the Academy Museum’s David Geffen Theater is “red.” From the walls to the seats, the carpet to the towering house curtains, the 1,000-capacity presentation space is resplendent in classic Old Hollywood red. And once a stream of jubilant Character Animation students from the School of Film/Video and guests came pouring in from the Miracle Mile on a May afternoon for the 2022 Character Animation Producers’ Show, one was instantly reminded of their tremendous dedication to the craft, and the great many trials they encountered over the past couple of years to finally get there.

This year marked the first that the Producers’ Show—which COVID-19 effectively nixed as an in-person event the two preceding years—was held at the Academy Museum. But the new location was far from the only thing that had changed since the last iteration. After all, animation students have experienced the now well-established challenges brought on by an abrupt transition to virtual learning. But also last summer, the Institute’s Character and Experimental Animation areas, as well as the Gamelan Room, were significantly impacted when an old cooling tower backed up and overflowed, causing the spaces to flood.

All told, the atmosphere at the Geffen Theater during the Producers’ Show thrummed with triumph, joy, and relief. In addition to the filmmakers, faculty, and show organizers, also in attendance were representatives from the myriad film studios sponsoring the event.

This year’s screening featured a selection of 27 student films juried by the Character Animation faculty. The show commenced with opening remarks from President Ravi Rajan, Provost Tracie Costantino, School of Film/Video Dean Abigail Severance, Character Animation Program Director Maija Burnett, and Associate Director Steve Brown, each of whom thanked the students for the resilience and commitment to filmmaking throughout the pandemic.

Following the remarks was the recognition of the evening’s guests of honor: Mike Rianda (Film/Video 11) and Jeffe Rowe (Film/Video 11), directors and writers of the Academy Award-nominated sci-fi comedy The Mitchells vs. The Machines. The pair reminisced about their time at the Institute and offered encouragement to the students, regarding them as the vanguard of the animation industry. Rianda and Rowe also announced the three student award winners:

Vimeo Award: “Everything Must Go” by Alisha Liu

Peer’s Pick Award: “Detective Alice and the Inside Game” by Kyky Yang

The full program followed the screening of award-winning films:

The Producers’ Show was the final event of the 2022 School of Film/Video Showcase, which presented special screenings by student films from each of the four programs—including the Character Animation Open Show, which took place on campus from April 22-23, 2022. Watch the 2022 Open Show works, among which are several of the films selected for Producers’ Show, on YouTube or Vimeo.