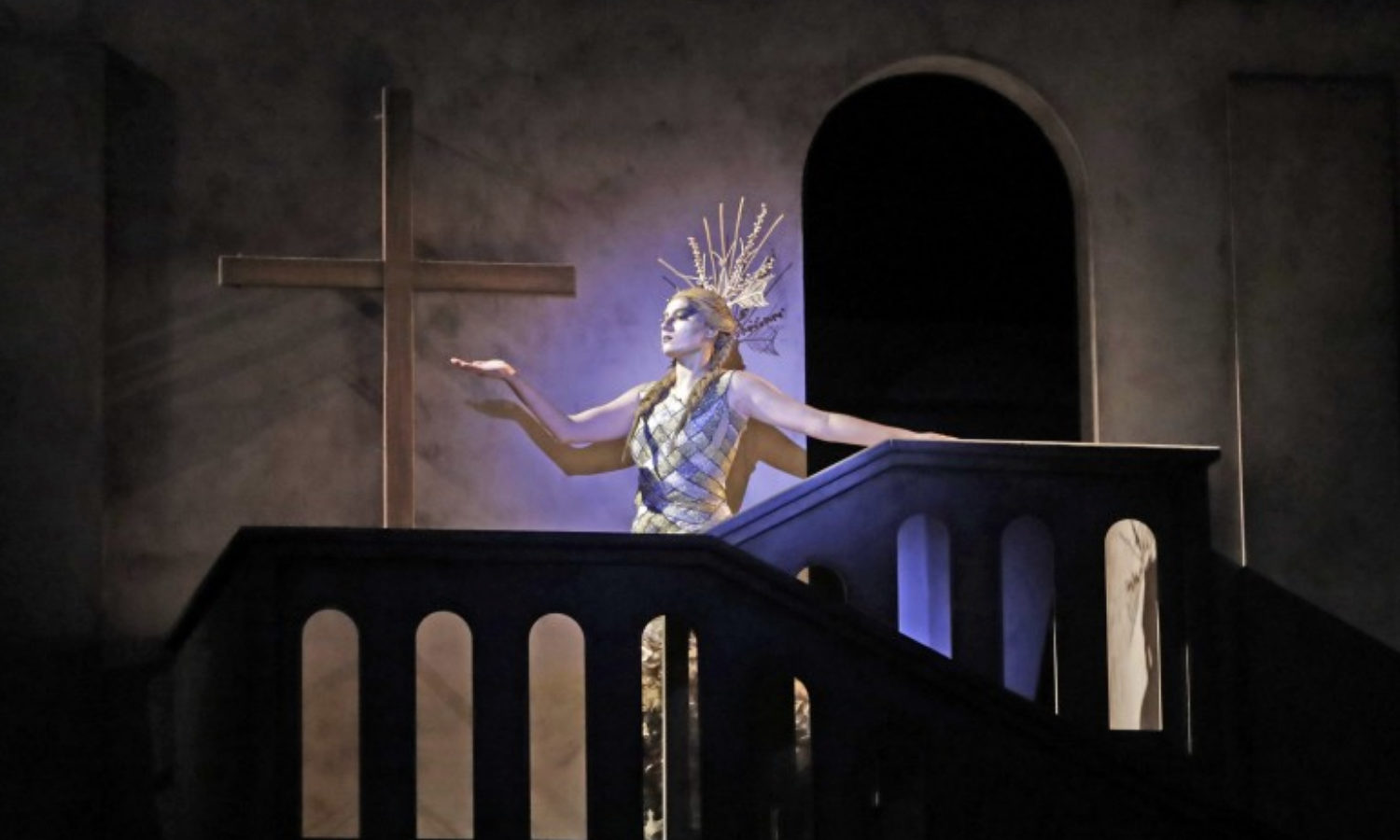 An image from the opera 'Juana,' with music by Carla Lucero.

Carla Lucero (Music BFA 86), whose previous operas include Wournos (2001) and Juana (2019), is gearing up for her most ambitious work yet, The Three Women of Jerusalem (Las Tres Mujeres de Jerusalén), for the LA Opera.

It will be performed on March 19, 2022, at the Cathedral of Our Lady of the Angels in downtown Los Angeles. The opera, like Juana, will be in Spanish and will involve live performance, audience interaction, and recordings of Spanish hymns from singers around the world.

It will be LA Opera’s first opera by a female composer, the first Spanish-language opera in its Cathedral series, and its first production since the pandemic began.

The idea of an opera about the Stations of the Cross began with Stacy Brightman, vice president of LA Opera Connects, who also requested that the opera have some humor amid the tragedy.

The focus will not be on Jesus, who won’t be shown at all. Instead, Lucero turns the spotlight on the three women of Jerusalem. “We see it through their eyes. Who are these women? Why are they there? And what happens to them?” says Lucero.

Traditionally, the women first appear at the Eighth Station, but Lucero brings them in at the beginning to witness the entire ordeal and to show their transformation. “All three of these women have a specific mission that they don’t realize until later on,” explains Lucero. “You see this interpersonal struggle happen while Jesus is going through the crucifixion. It’s a journey for everybody involved and I think for the congregation as well.”

Lucero, who now lives in Napa Valley, grew up in Manhattan Beach in a music-loving household. “My mother is from India and her father is Spanish and Native American. The one thing they had in common is they loved opera. So, I grew up listening to a lot of opera and a lot of world music,” she says.

She began at CalArts in 1982 as a piano major, although her goal was to become a composer. After auditing composition classes her first year, she was thrilled to be accepted as a second-year composition student.

Rand Steiger was her mentor, but she also took courses with Morton Subotnick and Leonard Rosenman. “[Rosenman] understood what it meant for a piece of music to be a narrative. He would ask, ‘What are you saying here?’ and that has stuck with me. What am I saying with the music? And that’s usually subtext. The music is telling the real story.”

Lucero was the only woman in her graduating class and one of a few students of color studying composition. “Because we were able to interact with the other schools so much and create art with the other schools, and because they had much more diverse populations, I really felt connected with other people of color and more women,” she says. “I felt much stronger as an individual, being able to work on these interdisciplinary projects. It was really integral in shaping me as an artist, especially as an artist of color.”

After college, she served as the director of Music at Hal Roach Studios and scored independent films, but she says, “Opera was always at the back of my mind.”

In 2001, her first opera, Wournos, about serial killer Aileen Wournos, was staged in San Francisco to mixed reviews. “It was so controversial,” she says of the production. “There was one critic who said, ‘Why is Miss Lucero wasting her talents on stories like this?’

“For a long time, I was one of very few women composers,” she reflects. “It’s only recently that I’m seeing a sea change. I think the #MeToo movement drew attention to women in male-dominated fields. Now, I’m seeing more and more women. I’m one of the rare ones that is a woman of color. And then you add Spanish-language opera, it’s [an] even smaller number.”

Besides writing Three Women, she’s working on an opera about Helen Keller called touch and the chamber opera Luz, which is set during the pandemic. Collaborating on various projects during the shutdown kept her going, she says.

“Right now, I’m happy because I’ve got a lot going on. During the pandemic, I was really worried. Now I’m hopeful.”

She adds, “The pandemic was kind of an equalizer. We’re all trying to find this common ground where we’re healing. The arts at our core is how we’re all coming together and finding ways to heal ourselves—each other and the broader community,” she says. “All the projects that are coming through now are totally cathartic.”